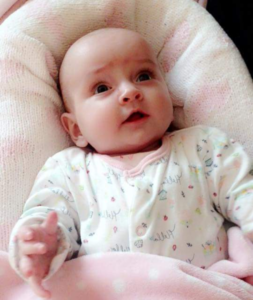 Skyler was first diagnosed with bilateral Retinoblastoma the 4th of May 2018.

Skyler was born 7 weeks early,  as were all my kids but as Skyler got older I noticed her eyes were not focused like all the rest of my kids.

I had brought her to the doctor’s at first because I was worried about her and she didn’t have a check up in the hospital for another 3 months when I brought her to the doctor’s and mentioned it he had told me what it could be just because she was small I wasn’t happy about it because being a mother of 3 others that were smaller and one of my kids were even earlier it just wasn’t right.

I had called the hospital and mentioned what was going on that I had noticed her eyes went focing and there was a white shadow at the time only in one eye her tight eye the doctor that was on the phone said bring her through A&E so few days later on the 4th of May we had brought her into A&E and Skyler went through some test and eye examination and that is when we were told that Skyler had eye cancer.

We were sent to Temple Street hospital that morning at 5 o’clock and Skyler went through more tests and MRI to see how bad her eyes were.
We found out that it had gone to both eyes. 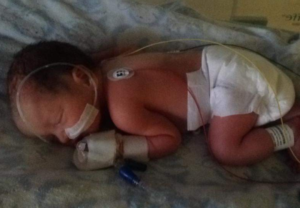 We spoke to so many doctors and they told us she will go to Crumlin hospital in Dublin to get chemo followed by going to Birmingham hospital were Skyler will under go Lazer and freezing treatment and every week.

We will also go to our own hospital for bloods and see if Skyler is able to get chemo the next time around or if she needs blood transfusions. She has a Freddie line (Central Line) put in and she had bone marrow done and lumber puncher done she has had a genetic test done to see why she got it or is she starting a new gene.

If Skyler ever has kids there is a 50% chance her kids will have it as well, so after she has started all this in such a short time all her chemo and Lazer treatment has started to work Skyler won’t be able to see from her tight eye but she will get her vision back in her left eye so as of right now this is Skyler’s story.