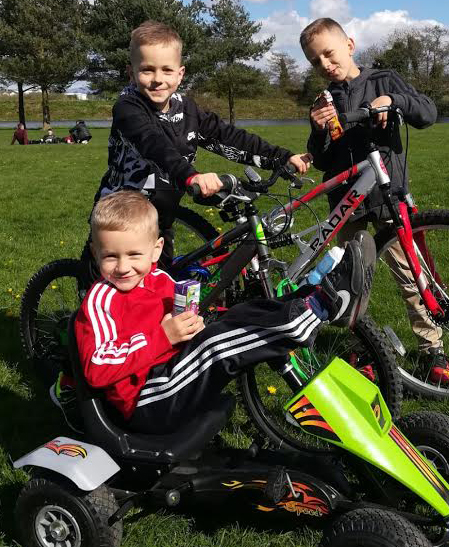 Sebastian is 7 years old and he lives with his Mum and Dad and two brothers in Newbridge.

He is a very happy and always smiling little boy. He loves to play football and is big fan of Barcelona.

Sebastian’s first symptoms began in April 2018. He had headaches, he was always tired, falling assleep after school and he started vomiting. We went to GP and were told there was no neurological symptoms and we were sent back home.

It was the 7th of May the bank holiday monday and Sebastian wasn’t well at all so we decided to go to Tallaght Emergency Hospital. After all symptoms we told doctor he had so far he had MRI scan done straight away. And few minutes later we found out there is a tumour in Sebastian’s brain.
Since that day our lives changed upside down.

Sebastian has completed his four sessions of Chemotherapy in Crumlin Children’s Hospital and had another scan. Scan showed that Sebastian had two tumourus on his brain and required immediate surgery.
On the 31st of July Sebastian underwent surgery in Children’s University Hospital in Temple Street where the surgeons removed tumours.

Sebastian is doing very well after surgery. He has started another session of Chemotherapy. As part of Sebastian’s treatment we will travel to Essen in Germany where he will receive Proton Therapy and will last for about 6 weeks.

We have received great support from all our family and friends. Sebastian received the best of care from all doctors and nurses but we cannot express how gratefull we are to John and foundation for support in this difficult journey. We cannot thank them enough.