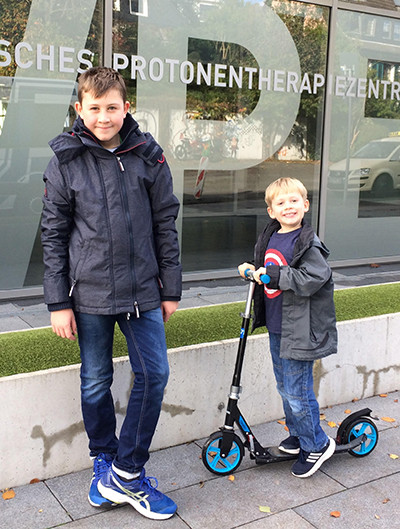 Big thanks to Edel and Leo for sending us the below on Sean who is latest Family we are helping.
Sean is 3 weeks into his treatment in Essen now. – 30th October 2017.

3 months ago we would never have envisaged how our lives would change overnight.
In the early hours of the 1st of August Seán, our 11 year old son, woke up with speech difficulties.
Later in Cavan General Hospital, Seán had seizures and ended up being ventilated in ICU and subsequently transferred to Temple Street Hospital. Scans showed that Seán had two tumours on his brain.

A biopsy, further indicated that one of the tumours was quite aggressive and required immediate surgery.

On the 18th August Seán underwent surgery in Beaumont hospital where the surgeons removed as much of the tumour as possible, however it was deemed necessary that further treatment was required and so began our Journey to Essen, Germany.
Three weeks have now been completed and we have settled into a routine of daily chemo and proton treatment at the WPE clinic made easier by the resounding support of family, friends, neighbours and the Gavin Glynn foundation.

Words cannot express how appreciative we are of the support that John and the Gavin Glynn Foundation have given to us during our journey to Essen.
The value of the work they do becomes so apparent when your family finds itself in this situation. All the logistical and financial worries of travelling with a sick child to a foreign country dissipated as they assisted us with the flights, transfers and accommodation. They also linked us up with other families who have been in similar circumstances.

The Gavin Glynn Foundation has made this journey for our family so much easier and for that we will be eternally grateful.
Thank you all and we will keep you updated x.
#nevergivingup #teamgavinglynn