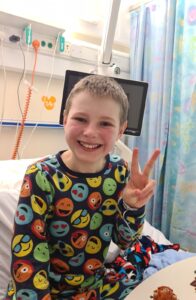 Sean is 12 years old from Wicklow Town, County Wicklow.  He is a very active, fun loving boy who loves playing football, gaming, swimming and spending time with his family and friends.  His positivity and calmness through this whole experience has been an inspiration to everyone around him, even the experienced medical professionals.

In November 2021 Sean started to complain about having headaches.  At first, they were about a week apart and mild.  By December 2021 the headaches came every few days but seemed to subside when he rested.  I noticed that Sean didn’t have his usual energy, was pale frequently and had lost weight despite having a great appetite.  In early January 2022 I contacted the out of hours doctor after Sean complained of a headache once again and was also nauseous. The GP on call advised taking Sean to Children’s Hospital Accident and Emergency Department for CT scan.

I immediately brought Sean to Tallaght Hospital A&E.  After being triaged and checked by a Doctor Sean was sent home with advice for me to keep an eye on him and give him Nurofen and Calpol when a headache returns.  I enquired about the CT scan and was told there was nobody available to carry out the scan.

Over the course of the following week Sean’s headaches became worse and he was vomiting regularly.  Once again, I made the journey to Tallaght A&E and stopped at an optician on the way to rule out vision problems being the cause.  The optician noticed Papilledema(swelling) behind Sean’s eye which is a reaction to a build-up of pressure in or around the brain.  The optician wrote a referral to A&E outlining his diagnosis.  I was advised to go straight to A&E where Sean would receive a CT scan.

When Sean arrived at Tallaght A&E I handed in the optician’s referral.  Sean was again triaged and seen by a doctor.  I was told by the doctor that Sean was fine, and I should continue watching him and giving him Neurofen and Calpol when a headache returns.  I enquired about the CT scan and was told that Sean didn’t need a scan as his vital signs were fine and his balance and speech were good.  I refused to leave and insisted on a CT scan being carried out.  The doctor eventually agreed to carry out the CT scan.  After the scan the doctor and a consultant spoke to us and informed us that Sean had a tumour at the back of his brain.  They said he would need to transfer to Temple Street Hospital immediately for surgery.

At Temple we were told that there was a 50/50 chance that the tumour was cancerous.  4 Days later Sean was operated on for 7 and a half hours at Temple Street Children’s Hospital by an amazing surgical team who removed an approx 4 cm diameter tumour.  After a biopsy we learned that Sean’s tumour was Medulloblastoma which is a type of cancer.  The team at Temple Street Children’s Hospital informed us that once recovered from surgery Sean’s treatment would consist of radiotherapy and chemotherapy.  The radiotherapy (Proton Therapy) was to be carried out in Essen, Germany for 6 to 8 weeks after which he will attend chemotherapy at Crumlin Children’s Hospital.

Sean was referred to Crumlin children’s Hospital to oversee his cancer treatment.  It was at this point that The Gavin Glynn Foundation reached out to help us.  John and his team at The Gavin Glynn Foundation have made the journey to Germany so much easier on everybody by organising everything from travel and accommodation to even organising an Irish contact in Essen to show us around and help with day to day living and advice.

In February 2022 Sean travelled to Germany to start his Proton Therapy treatment.

We will be forever grateful for the amazing dedicated people we have met on this journey so far but have learned that it’s very important to seek a second opinion and go with your gut feeling as a parent.  The support from family, friends and the local community has been overwhelming and something we will always be grateful for.
[/av_textblock]