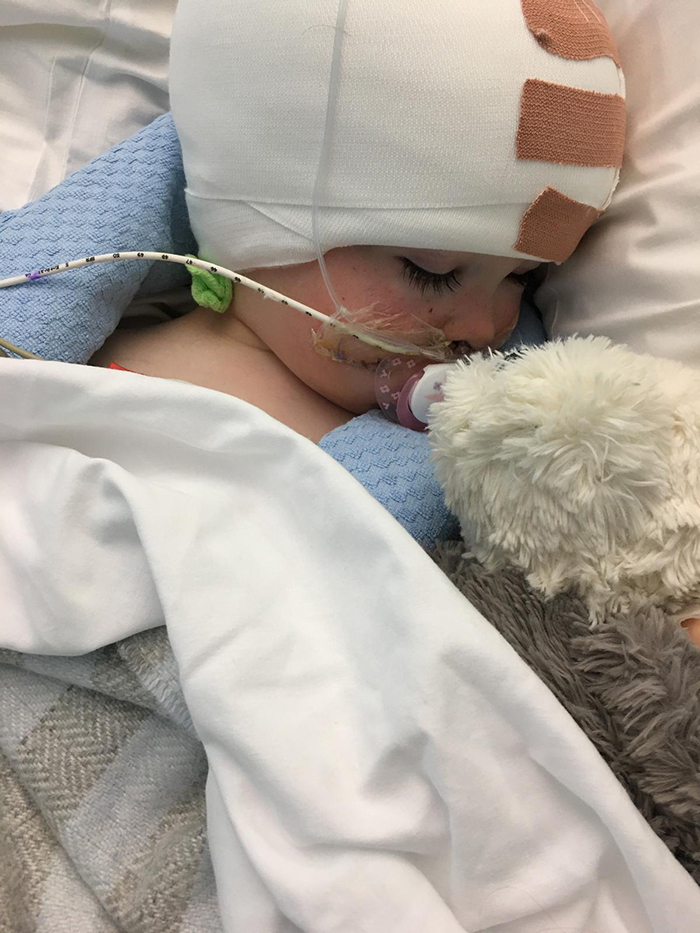 Sean is a funny, energetic little boy who loves trains, cars and playing with his big sister and little brother. He cracks us up with his dinosaur impressions and stories about fire engines. At the end of May, we received the devastating news that our brave little boy was diagnosed with an Ewing Sarcoma brain tumour. His tumour had developed close to his brain stem and was large and aggressive. He had developed Bells Palsy a couple of months previously but there had been no indication that it was a sign of anything more. His diagnosis came after he had been vomiting intermittently and had displayed bad balance when walking. Hearing that our beautiful 2 year old was to under-go emergency surgery in the middle of a global pandemic while we were also caring for our 14 week old and 4 year old was absolutely devastating.

After a number of initial surgery’s in Temple Street, Sean’s treatment then involved an aggressive course of 2 different types of chemotherapy on a bi-weekly cycle for 28 weeks. The surgery had not been able a large portion of the tumour and more surgery was unlikely to take place due to the placement of the tumour.

After 4 cycles of the chemo, Sean had a scan which has displayed a significant reduction in the size of the tumour. He has been incredibly well cared for by all the team in Crumlin and on St Johns Ward. We were then informed the next step in Sean’s journey would be to go to Essen, Germany to receive Proton Radiotherapy. We desperately hope that this treatment will give Sean the best chance to beat his illness. This involved the whole family travelling over for 9 weeks while Sean gets this treatment in conjunction with his chemotherapy which will continue while we are here.

The practicalities of trying to organise how to uproot the whole family to a country where neither of us speak the language would have been incredibly daunting at the best of times, but when cancer treatments and global pandemics are taken into consideration, it’s fair to say the stress levels would be through the roof.

However, thanks to John Glynn and the unbelievable work he does through his charity the Gavin Glynn Foundation (TGGF) this was not the case. His constant availability to us as a family during this incredibly hard time has taken our breath away. It’s like having a personal assistant working directly for us 24 hours a day but in the knowledge that he’s performing this role for other families that are also going through the same experiences.

To put it simply, John is angel, champion, organisational genius and counsellor all wrapped into one. The organisation helps people who are going through the most traumatic experiences a family will have to deal with and John is there all the way through to make it that bit easier for everyone. [/av_textblock]