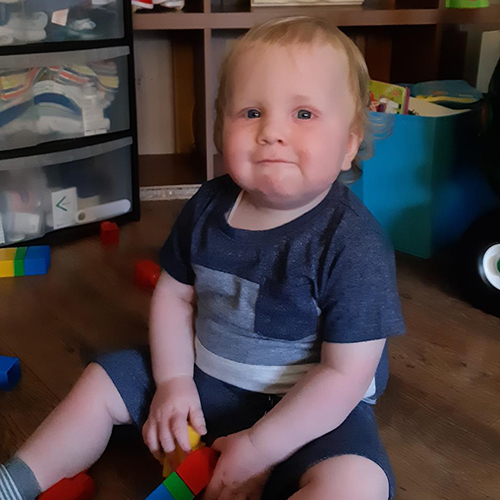 Our beautiful boy Mikey was born on the 13 of December 2017 just 2 years after we lost his brother Seán aged 5 from neuroblastoma cancer . We were so happy he was born healthy. Unfortunately at just 10 weeks old Mikey started going off his feeds and his tummy started to swell so we brought him to our local hospital in Clonmel. Within an hour of his bloods been checked they were almost sure he had infant ALL leukemia, we were just devastated and heart broken. Mikey was transferred to Crumlin the next day the 19th of February 2018 his white blood cells were the highest they had ever seen and it was confirmed Mikey had leukemia. Our world just fell apart for the second time. Mikey was in ICU in Crumlin for a week, he was very sick and we didn’t know what was ahead of us but he got stronger everyday. Mikey underwent 3 months of intense chemo and at just 7 months old he had a bone marrow transplant from an unrelated donor from America which we were very grateful for .

Mikey did really well after his transplant but unfortunately the end of may this year 11 months since his transplant we were told mikey had relapsed. Thankfully we were told that there was a Car T cell therapy available for Mikey in Manchester and this is Mikeys best chance of a cure. We got in touch with John from the Gavin Glynn foundation as they help families that have to travel abroad for treatment we are so thankful as we didn’t have to worry about expenses for flights accommodation and all the assistance when travelling with a sick child everything is taking care of from John and his team and for this we will be forever grateful.

Mikey has been to Manchester already for a week to start his treatment and is due back again to Manchester in 2 weeks time. We will have to stay there for about 5 to 6 weeks. Even after everything Mikey has been through he is the happiest little boy always smiling we are all so proud of him, he is adored by his big brother Dylan and he has his own little angel Seán watching over him. #teamgavinglynn #neverevergiveup