The below amazing story was sent to us by Elaine Mc Govern.

Elaine son Max will be travelling to London soon for treatment with the help of The Glynn Foundation.

I will never forget the moment I was told my son had Cancer. It was in a dark and quiet room in the Emergency Department of Crumlin Childrens Hospital. Cancer is a horrible, dirty word. So, the Oncologist treaded lightly that day, referring to the growth on Maxes liver after a brief pause, as a tumor.

It couldn’t have been more than a second or two before the gravity of what he was telling me sunk in. The world stopped spinning and everything went dark. Just for the briefest of moments the word hung in the air between us and then everything came rushing back into sharp focus. A tumor. I sobbed. He hadn’t said cancer, he had said a tumor. I didn’t even know how afraid of the word I was until it described the hard bump that protruded ever so slightly out under my sons bottom left rib. 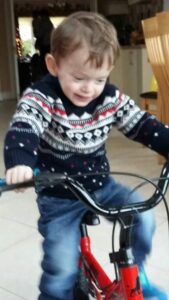 Max was born fighting at 28 weeks. He was an incredible gift that I was never supposed to get to keep. I PPROMed at 17 weeks. To the rest of us, that means my waters broke and, from then on, Max survived in my tummy with no measurable fluid around him.
We were told it was unlikely he would survive. We were told that his lungs would be so underdeveloped that he would never be able to breath unaided. We were told to expect brain bleeds and cognitive delays. He was 6 hours on a ventilator and 3 days in the NICU. After 70 days in the SCBU in the Rotunda Hospital, he came home with nothing more than an Angel Care apnea monitor. Max is a fighter.
As premature babies go, he was fairly average. He has always been small and always been light. So we just thought the bump on his chest was his bottom rib sticking out. Nothing a few trips to McDonalds couldn’t sort out. After a week, we noticed that the bump seemed to be getting bigger. So, we thought to ourselves we would bring Max to the G.P. just to ease our minds. After all, Max had been saying he had a sore tummy. Maybe it was all related.

Max was diagnosed with a Hepatoblastoma on 22 December 2015. The first week after diagnosis was painfully slow. It was Christmas week so we were sent home with instructions to “enjoy Christmas”. We were told that at 3 and a half, Max was at the age where a missed Christmas would be noticed and his mental health was as important as his physical health when starting treatment.

I can’t even begin to describe how hard that week was. We were consumed by grief. As far as we were concerned, it was only a matter of time before my gorgeous son would be taken from us. Family are so important at times like this and, thankfully, we have close family living nearby that were able to step in and provide the fun Christmas that Max so badly needed. Marcus and I kept collapsing, consumed by grief and anguish. No words can begin to describe how terrified we were. It was almost a relief when Max started treatment on 28th of December.
The type of tumor Max has is quite rare. There is, on average, only three children diagnosed with this form of tumor in Ireland every year. We were told that, to start, he would undergo 5 rounds of chemotherapy. We were also told that the tumor had spread to nearly all segments of his liver and so there was a very real possibility that he would require a transplant. For this, we would have to travel to King’s College Hospital in London. This is the centre of excellence in 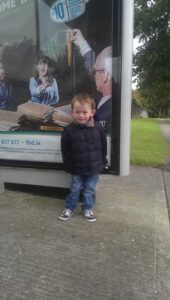 Europe and we would be in very good hands.
As a parent, being told that your child has a tumor is earth shattering. And just like an earthquake, every dream you had for your child from the moment you found out you were pregnant begins to crumble. I have found it so difficult to think straight, simple tasks like doing the weekly shop have become almost impossible. I can’t keep a thought in my head long enough to see something through. How am I supposed to plan the most important trip of my son’s life?

The fear of making the simplest mistake has left me paralysed. This is where the Gavin Glynn Foundation has stepped in. They have come to my family’s rescue. They have taken the worry out of arranging the travel logistics and accommodation. I don’t have to worry that I am going to do something that will endanger my sons treatment.
It might sound silly, but that’s how I feel.

It is true that in the darkest hours of your life, people, even those you have never met before, will be there for you and will lead you back into the light.

This is exactly what John Glynn has done for us. Thank you John and thank you Gavin. You will always be in my prayers. x

I started writing this two weeks ago, I simply wanted to thank everyone at the Gavin Glynn Foundation for their trojan effort in helping us this time last year when we couldn’t help ourselves.

But, as I began to write my thank you and an updated on Max 12 months on, it turned into a novel. You see, it is so hard to separate a thank you for all the support the Gavin Glynn foundation gave Max in our darkest hour and the life altering journey that was his cancer treatment. When your child is diagnosed with cancer, it becomes your focus. In Max’s case, it was a hepatoblastoma. It is all you can think about and all you ever talk about. It dictates everything you do, you can’t make plans without considering that most unwelcome guest.

For example, last March, we didn’t got into Dublin to watch the St Patrick’s Day parade, because we were expecting a call from Kings to tell us a donor had been found to give Max a second chance at life and we couldn’t be more than 5 minutes away from our house. I cannot put into words what it means to have the support of The Gavin Glynn Foundation at this time. They are a warm cup of tea and a woolly blanket after coming in from a horrendous storm. Everything happens so seamlessly, that you don’t even realise all the work that has gone into getting you from your home to the hospital in a foreign country, setting you up with accommodation and living expenses and seeing you home again.

Thank God for people like John and Jayne and all who donate to help raise funds for the Gavin Glynn Foundation, because that’s exactly how it should be. The parents of sick children need to focus on their child, not worrying about lost luggage or worrying that they can’t afford to stay at their child’s bedside. And I thank God every day that the storm, for us at least, has passed.

12 months on, and we are planning to go to Walt Disney World in Florida. We will be there exactly one year on from Maxes liver transplant. He will get to live every 4 year old little boys dream. He is going to meet Mickey Mouse and all the Disney Junior gang, stay up late, watch the fireworks and eat ice-cream for every meal for 2 weeks.

I hope, in time, he forgets the 3 months he spent last year cooped up in hospitals and wearing nothing but pajamas and instead the memory is replaced with the 2 weeks he is about to spend in Disney World, Florida.

Thanks to everyone who supported us on our journey. Lots of love, Elaine and Marcus. x

Here is a pic of Max and Hugh taken on Christmas Day. That would be 12 months on from Maxes initial diagnosis. 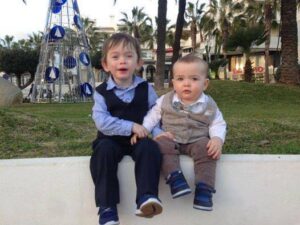