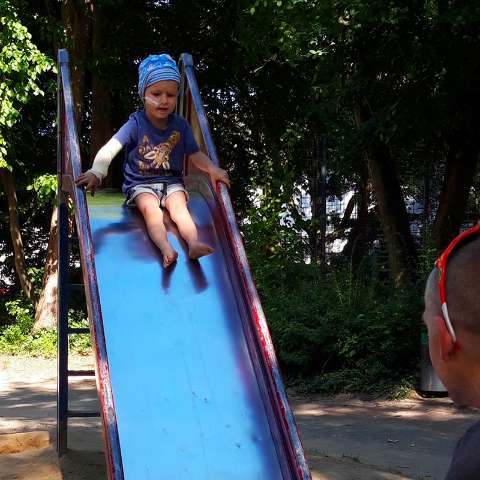 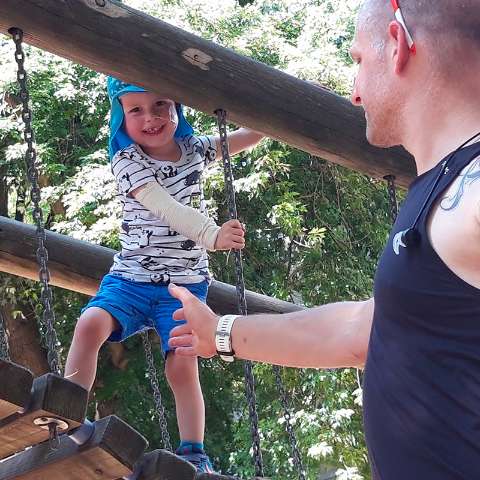 Logan is our only 3,5 year old child. He is always happy and smiling. He loves music, singing, dancing and playing with any transport toys. He also loves playing with everybody and whoever comes in our house (children or adults), Logan grabs them to play with him. On the evening of the 7th of June, we noticed that Logan’s head was tilted and he was off balance. He had no pain and could still move his head but it was still tilted. So we got it checked in GP who sent us to Crumlin hospital. Within few days, he passed a CT scan which revealed extra fluids so then an MRI which gave us the unexpected and sad diagnostic that Logan had a brain tumor.

The only thing we knew at that time is that it was very small and we were lucky to have detected it that early. We were transferred to Temple street where they are specialised in neurosurgery. At first, we were told that Logan would have a biopsy but then it turned out that he would go for a surgery to get the tumor removed as it was really hard to reach. We had to wait a few days for it to take place and the wait was so stressful and seemed so long.

On the 16th of June, Logan had his surgery. The chirurgical team did an amazing work and managed to totally removed the tumor. A week after, the biopsy revealed that the tumor was called Anaplastic Ependymoma grade 3 and was indeed malignant which meant that Logan would need to go to Germany for a proton therapy treatment. We were discharged 2 weeks and half after surgery but 2 days after we had to make our way back to Temple Street. Logan’ scar leaked and it looked like he needed a shunt which would help him to recover better. We spent another 5 days in hospital. While still there, we learnt we had to be in Germany a few days after to meet the team and organise his treatment.

As Logan had still not fully recovered (sick and still not eating), it was very stressful to think that we had to go so soon to Germany. Thankfully the Gavin Glynn foundation looked after everything we needed for the trip (transports, flight and accommodation) which put less pressure on us and we could focus on Logan only. We will always be grateful for it as this was a huge help. So we managed to go back and forth with no issue. We then had about 10 days to get ready for the 6 weeks trip to Germany. Once again, John glynn did an amazing work. Thank you again!

We are now (2nd of August) in Germany. Logan has already been through one week of treatment. He is in great form. He is tube fed (day and night) as he still hasn’t got his appetite back since the brain surgery. He can have some bad time as he is still getting sick but not too much so far. But we know that the treatment has some side effects and we are expecting Logan to be sick more often and get more tired. From the first time we went to the hospital, Logan was always in good hands and we always get the support of every team we met. As for today in a foreign country, we don’t feel alone as both the Crumlin team and the Gavin Glynn foundation have been keeping in touch with us to make sure our journey is smoothly done and they are ready to help if needed. Thank you!!!