Layne is my 3 year old wild mischievous most lovable little boy.
Layne was born on 02/10/2019 and after a few complications in pregnancy and  having some genetic markers when born he was diagnosed with a rare genetic disorder called Beckwidth Weidemann syndrome (BWS) confirmed with a blood test  . With BWS there is an increased risk of Tumours particularly a form of Kidney cancer called Wilms tumour and a form of liver cancer called hepablastoma. With that Layne was monitored every 3 months in CUH with abdominal ultrasounds.
This became part of or normal routine and as the years went on I was feeling less anxious and hoping the chances of Layne developing a tumour were reducing. Layne had a scan as normal on the 6th of October and when Layne’s consultant rang my phone on the 26th of October I knew what he was going to say before he opened his mouth. They had found a mass on Laynes right Kidney and needed him in a few days later for an MRI. Two weeks later we were advised we were being referred to Dr Michael Capra and his oncology team in Crumlin.
On the 6th of December we met with Dr Michael Capra who is a brilliant man and we knew  from 5 minutes after meeting him we were in the best hands. He advised us from the images that it was likely a Wilms tumour and it would need to be removed by surgery. The surgery would have to be carried out in Great ormond street London. Our social worker in Crumlin told us to contact John and the Gavin Glynn foundation to help with the logistics of it all.
From the moment I made contact with John nothing was a problem. It was like dealing with my friend.  Flights accommodation and transfers were all arranged which helped relieve so much stress and panic we had. We could focus on the operation ahead with one less worry.  We are so grateful for organising and financing our trip from Cork to London.
We flew out on January 11th and we are currently in Great Ormond Street. Layne had his operation this morning to remove the mass on his kidney which was done successfully. We are hoping for a full recovery here in London  and we will be discharged back to Crumlin next week. We pray this will be the only battle Layne has and will have to continue to monitor for any future tumours.
We cannot thank John and  the Gavin Glynn foundation enough and look forward to helping pay forward the kindness that was shown to us in future to any family who has to go through this.
Kendra David and Layne 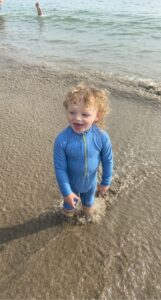