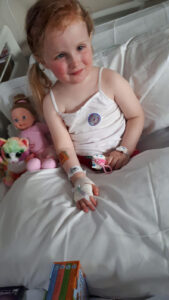 Usually very sociable and fairly active in recent weeks she had been complaining of sore neck now and again and usually toward end of the day so we considered it a tiredness issue or a muscle needing to be strengthened. At same time, keeva had been noticeably less happy going into creche each day and had withdrawn into herself somewhat and not wanted to interact with her friends there.

We visited a child physiotherapist and no muscle issues identified but given some head and neck excercises to work on the area.
We went to craniosacral therapist, for some review but no change. We had number of doctor visits and eventually had referral and made appointment with orthopaedic consultant.

Before the appointment we took a planned family trip to spend a week in cambrils, spain. And keeva’s first time on a plane, and her and two older siblings siofra and evan excited o see some sun and fun for a few days!
However, During that week, while we enjoyed a lovely break keeva was tiring easily and not keen to walk any length of time and wanted to be in or close to her stroller all the time. She did not want to spend time in the pools and preferred to rest. It became obvious that keeva didnt want to take on any steps, not keen to walk without help or hand holding. Her coordination and balance had gone down hill very quickly. Within days of returning and after one or instances of vomiting with no obvious tummy bug signs or anything, we discussed with her doctor and decided an A&E referral was needed and not to wait for approaching orthopaedic appointment later the same week.

In the local hospital they completed a CT scan and identified a mass at base of brain and on consultation with specialists in temple street, a scan image that merited a ‘blue light’ ambulance run within hours to temple street.

Keeva was brought to temple street and after some MRI scanning was operated on 5 days after arriving to remove a large tumour. The surgery according to medical team has gone well, and 2 weeks after surgery and a secondary operation for the placement of a shunt to aid Keeva’s recovery, we were able to leave hospital to be home for a couple of days.

Keeva has made good progress and recovering her pre operation vibrance and humour.

We are currently waiting to start next stage of radiotherapy in Essen in mid July where Keeva will undergo 6 weeks of Proton Therapy.