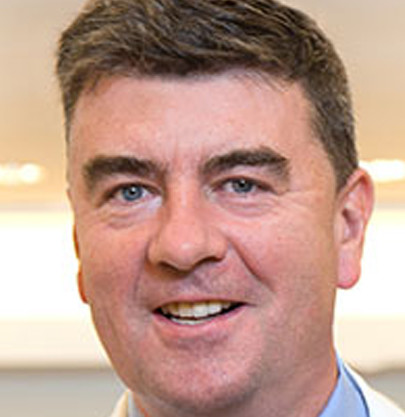 A cancer specialist with more than two decades of experience, Dr. Giles has led the development of novel drugs, immunotherapies, and other highly targeted approaches, including cancer-directed viruses, monoclonal antibodies, and molecularly directed agents.
Among his many accolades, Dr. Giles was recently elected as a Fellow of the European Academy of Cancer Sciences. He earned his primary medical degree from the National University of Ireland, Galway (NUIG) and a Doctorate in medicine from NUIG in 2003. He is a Fellow of both the Royal College of Physicians of Ireland and the Royal College of Pathology (United Kingdom). Dr. Giles has particular interests in the mentoring of developmental therapeutics physician-scientists and in international collaborations across the bioscience spectrum. Prior to joining Northwestern, Dr. Giles was Director of the HRB Clinical Research Facility, Galway. He is a Professor of Cancer Therapeutics at both NUIG and Trinity College Dublin. Previously, Dr. Giles served as Deputy Director of the Cancer Therapy and Research Center at the University of Texas (UT) Health Science Center, San Antonio; Chief of the Division of Hematology and Medical Oncology; and Director of the Institute for Drug Development. His prior positions include serving as Professor in the Division of Cancer Medicine at the UT MD Anderson Cancer Center, Houston, and as a faculty member at the University of California, Los Angeles, and the University of North Carolina at Chapel Hill.
He is the founder and Chairman of both the International Oncology Study Group and the Developmental Therapeutics Consortium. He has authored more than 500 peer-reviewed articles on bioscience research in academic journals.

He has served as principal investigator on numerous national and international First in Human, Phase I, II, and III clinical studies of many novel agents, and holds numerous patents and technology licenses.
Dr. Giles has focused his clinical and research efforts on providing therapy for patients suffering from treatment-resistant or refractory cancer. He has pioneered the use of many agents that are now in regular use as targeted therapies for patients with cancer. Dr. Giles has particular interests in the mentoring of developmental therapeutics physician-scientists and in international collaborations across the bioscience spectrum.
[/av_textblock]