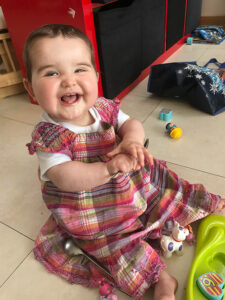 Erin was born 29th April 2018 and was a perfect, beautiful little girl. We initially thought Erin had reflux as she couldn’t hold anything down and continued to loose weight which brought us to the hospital when she was 4 weeks old. Within an hour of arriving in the hospital Erin was diagnosed with infant acute lymphoblastic leukaemia. As Erin’s white blood cell count was so high she was brought straight to ICU where she spent the next 8 weeks. Erin was a tiny, new born baby and had to fight very hard every day for those first 8 weeks.

We were told Erin would need a bone marrow transplant after 3 rounds of chemo all going to plan.
After three months in hospital Erin got home and we spent the next 5 months between the hospital and home while Erin had chemo. Unfortunately her treatment did not go to plan and Erin relapsed while getting chemo and could not go to transplant as planned.

As the chemo was not working Erin got a 28 day cycle of immunotherapy and amazingly it worked brilliantly and so they continued with a second round of it. It was a new drug and Erin was among one of the first children in the hospital to get it. After the two rounds of immunotherapy Erin was ready for transplant and we were over the moon. We thought we would never get to this point.

Erin got her bone marrow transplant on the 18th January 2019 from an unrelated donor and she looked to be doing well but on the 30th May, after being in for a blood test that morning we found out Erin had relapsed, 4 months after transplant exactly one year after being initially diagnosed. We thought we had reached the end of the line and we were out of options but then we were told about CAR T cell therapy. It’s not yet available in Ireland so we have to travel to Great Ormond Street in London.
Erin has already started treatment where they have collected her cells and they have been sent to America to be modified and all going to plan she will get her modified cells back in 6 weeks.

We have been given this last lifeline and are hoping that after all Erin has been through in her very short life that now, she will defy the odds, as she has already done to come this far and beat this horrible disease that we can’t get control of.

Erin is a truly amazing little girl. No one should have to go through in their whole lifetime what she had been through in her short life. Even when she was violently sick from the treatment she still managed to smile and laugh. We knew she was really sick when we couldn’t get a smile and those were very difficult days. She has everyone wrapped around her little finger, especially her big brother and sister and knows she can get away with anything if she gives one of her cheeky smiles. Erin is a true inspiration and is my hero xxx