This is my daughter Erika, who was born prematurely at 31 weeks. 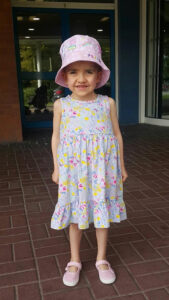 She was diagnosed with hydrocephalus, a brain condition in which she needed a vp shunt put in place in her brain. In November 2018 we noticed Erika was vomiting on and off for a few weeks and on holiday in Lanzarote in the first week in December she got very unsettled and agitated so we brought her straight to our local GP to get her checked. She was sent straight to Temple Street for a shunt revision as her shunt had gotten blocked and pressure was building up in her brain.

The day after her operation I noticed her belly was very swollen but I just thought she was constipated after her anesthetic so she went home that day. Erika wasn’t getting any better as the days went on, she was restless in bed and in a lot of pain around her belly and going down her leg. I had her in the local hospital every day for 2 weeks coming up to Christmas, trying to find the problem and they said she was constipated so gave her all sorts of laxatives. I got fed up of being sent home as Erika was getting worse and on 23rd December I brought her in and demanded a scan be done on her abdomen. Eventually they agreed and found a huge mass in her pelvis going into her abdomen. Erika was rushed straight to Crumlin that night and got a biopsy done and a Hickman line inserted. She was diagnosed on Christmas Eve with high risk embryonal rhabdomyosarcoma and her tumour was 14.5 cm x 9.5 in size.

Our hearts broke when we heard this news. We knew then that it was the tumour that caused her shunt to block, it was all connected. Erika’s tumor was so large that it pushed her bladder to one side and also made her go into kidney failure so she ended up in ICU on dialysis Christmas Day. Erika was in ICU for 4 weeks and her shunt had to be externalised again as it blocked from the tumour a second time. She started chemo on St Stephen’s Day and has completed 9 rounds of chemotherapy .She spent 7 weeks in hospital and got home on 10th February 2019. Erika had surgery on 21st June and the surgeons removed 97% of the tumor. One side of her urethra tubes were removed..

Erika has being through the mill and still comes out smiling. She amazes myself, her daddy and her sister every day. She is so brave.

The next step is proton therapy in Germany in the coming weeks and we were really paniking bout this until I got talking to John glynn from The Glynn Foundation and he reassured me everything will be fine that him and his team are going to help us out with the financial costs of going over to essen.
When I heard this I just felt so relieved and I’m so thankful that they are helping us at this difficult time as I would not know where to start if I had to do it myself.