This is an issue I’ve been fighting for Ellie since the minute she was born, I noticed a difference in her left eye and brought it to the attention of the doctors who just said it was a little infection and treated it as so… when it didn’t improve I fought with several medical professionals that this was not improving and there was something definitely wrong with her, 2 different doctors told me I was suffering with postnatal depression and that my baby was perfectly fine another doctor said ‘I suppose this is your first child’ in other words I didn’t have a clue and making a fuss over nothing.
Thankfully my own GP listened and said if you think there is something not quite right about Ellies eye I’ll fight it with you and in his own words ‘there’s nothing ahead of mothers instinct’
For years I persistently pushed with different opinions from a lot of doctors, we did glasses at 3 months old, contact lenses at 8 months old and patching, Ellies patching was most certainly one of the most difficult times of the family’s life.
My happy bubbly super positive 3-year-old was lost in a world of darkness. She sat on the couch for 8 hours of her patching day and barely speak. Her sight was gone in the ‘bad eye’ but they still insisted they could bring it back. The NCBI were brilliant with us that time and gave us so much support in those months but eventually I got through to the optometrist one day and said this has to stop its not working, they had tried to keep it going but I just said no we are done with this…
Ellie went on to have regular checks on her ‘good eye’ and all was fine for 4 years until one day in Nov 2018 a doctor in the UHL noticed a change during a routine check up… this is the day Ellies World was turned inside out…to her she was fine, and it was the doctors that made her sick as she used to say….
They noticed a massive swelling on her optic nerve of the only eye with sight, panic set in and lots of tests began, lumbar puncture, MRIs, angiography etc etc,
Since then we’ve been sent to Beaumont and Temple Street, Ellie was put on steroids and a drug to bring down swelling inside the brain, (initially they thought it was intercranial hypertension) but a year on and after more tests including ICP monitoring’s (opening of the skull to insert wires to the brain to measure pressure the optic nerve remained extremely swollen, I was extremely anxious for answers but I was told don’t worry…what happened the left eye won’t happen the right.. they took her off all meds which she was delighted with as was I, it was making her so sick and there was so many days missed in school that year.
Then covid hit and there were no hospital appointments only virtual…. a but ridiculous when they really needed to use machine to look into the back of the eye.
Eventually in July this year on a routine check it was noticed Ellies vision had deteriorated.
She was sent for an urgent MRI and after a long 6 weeks trying to get results of the scan, I was told the scan was clear, but I was having none of it as I noticed her sight was rapidly getting worse, she was getting clumsy, she couldn’t see simple signs or regular things she could easily read before.
So, they took us back to temple Street for more tests and making a long story short they eventually found Ellie had multiple menigioma tumors in her brain, they are such a rare size and it’s never been seen in a child in Ireland before, these tumours are usually on 50- to 60-year-old women where they are quite large and operable, so this is why they took so long to figure it out.
In that small tiny room, I can still hear the words “tumor” “cancer” and “blind” it was all a haze of absolute bedlam in my head, I will never forget the look on that doctor’s face as he finally gave me the answer to a question I no longer wanted the answer to!
I was told that due to the fact of where one of the tumors were located on the optic nerve it was not possible to operate, and because there are others around the back of the brain on other cranial nerves that it was cancer, I was told chemo was not an option for this type of cancer and that he didn’t think radiation could be performed either, he told me there was only a matter of time left in her sight and to go see the world before it went completely.
When I asked was there anything, I could do to help slow the growth of the tumor he said there’s absolutely nothing you can do only go and enjoy showing her the world. 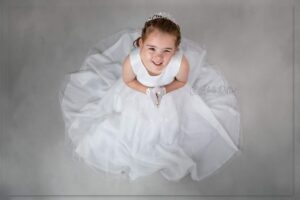 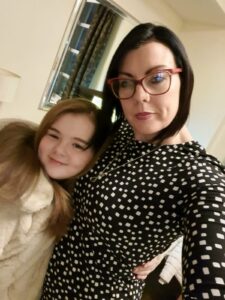 Fast forward a few weeks later, a biopsy was done on the blind eyes optic nerve and that confirmed it was in fact meningioma that had took the vision from that eye when Ellie was 3.5years old.
But they found it to be benign… so we now live-in hope that maybe one day they can tell us the other tumors are benign.
Crumlin had a look at Ellies files and images and have decided they are actually going to give radiation a try to hopefully preserve some bit.
The option is called Proton Beam therapy and we were told its not available in Ireland and we would be sent to Germany, my head was in another spin…who what where when HOW?
That’s when I was told ring this man John Glynn from the Gavin Glynn Foundation and he’ll help you and my god was that the understatement of the year…
I looked it up on Facebook to find I had already liked the page and had donated some years previous from seeing people sharing what these absolute earth angels do…never in my wildest dreams did I think I’d actually need them!
I made the call to John and within minutes he had my mind put at ease, he really is an absolute angel.
#TeamGavin
#childhoodcancerawareness
#neverevergiveup