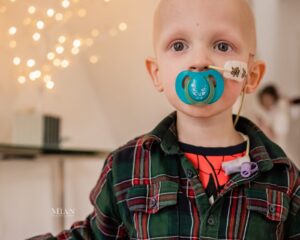 He had never seemed tired or complained of any pain and he didn’t have any visible signs of anything being wrong with him.

In the year leading up to this he had had difficulty getting to sleep and would wake often during the night and get up very early in the morning. He also would get very frustrated and have emotional outbursts over nothing at all. I had concerns about his behaviour and sleep issues which I spoke to the doctor about. The importance of sleep routines was discussed, but we had really tried everything at that point, and I was worried something else was wrong but never could have imagined what was to come.

One night in October, I came home from work and Dylan was having difficulty going to the toilet. That night he was awake every few minutes crying. Laxatives didn’t work in the morning I noticed his tummy was swollen and hard and knew something was really wrong and I took him straight to hospital that day.

On examination at the hospital, they observed he wasn’t urinating, and his bladder was swelling up. And they put a catheter in which was traumatic for him, but it alleviated some of his symptoms.  He spent a week in the first hospital and had ultrasounds and x-rays which didn’t show anything. I’ll never forget all those nights he was screaming in pain and he didn’t sleep for longer than an hour or two in between.

He was transferred to Crumlin where he had further tests that showed nothing. We were sent home until a bed was to be ready for him but back home for two nights and he was still not sleeping and crying in pain, and on the second morning there was blood in his urine. I took him to A and E to get him back into hospital and he was scheduled for surgery for a suprapubic catheter to be put in place and at the same time they did a cystoscopy. His consultant came in immediately to tell me they had found a mass or growth. He was immediately scheduled for an MRI on the next day and after it our worst fears were confirmed that our baby had a cancerous tumour, Rhabdomyosarcoma in the prostate region.

I can’t describe the devastation and grief that hits you when you hear these words. It’s like a full force tidal wave hitting you and all the time you’re trying to keep your head above water.

We have two other small children; Dylan has a twin sister also age three and a 5-year-old sister and trying to normalise everything and keep our grief hidden was hard. Also, they had never been apart so that was really difficult for everyone too.

Even during this time, Dylan had a catheter in, and he was still running around in the hospital and playing football- it was so hard to comprehend he was now a cancer patient.

The following week he had surgery for a Hickman line and his chemo started. Thankfully his bone marrow and bone scans were all clear and the cancer had not spread. Once we heard this we thought ok, we just look forwards from now and we are going to get him better. We were told he would need brachytherapy or proton therapy and to prepare to go abroad, this was a shock too when we realised how long proton therapy in Germany takes to complete. All along we had been preparing for Proton: his tumour was so large at the start.

Luckily Dylan’s tumour responded so well to Chemotherapy and after an initial assessment in London this month it was confirmed he can receive Brachytherapy there. It is a much shorter treatment and will be much easier on him.

There is a wonderful charity, the Gavin Glynn foundation who look after families who need to travel abroad to access treatment for cancer. I was amazed that somehow John had heard our story and kindly reached out to us.  We spoke about our brave boys.

It meant a lot to even just be able to talk to someone who has been through this also and to know they understand what we are going through.

John took care of all the logistics:  flights, hotels and taxis and even covered expenses for us, he rearranged flights home for us at the drop of a hat when Dylan was finished his hospital stay early, and he even checked in with us the night before the trip and every day to see how we were getting on which was just so thoughtful.

We are truly grateful to John and Jayne and the Gavin Glynn foundation for helping our family on this journey. Dealing with this diagnosis is the most stressful event of our lives and the thoughts of having to coordinate bringing the family abroad is another huge worry. You have taken a big weight off of our shoulders. Thank you for the wonderful work you do.

We are now awaiting our next date to take Dylan over for his Brachytherapy treatment early in March, and the Gavin Glynn foundation are also assisting us with this leg of the journey. Dylan will finish the initial 6 month of Chemotherapy and move into maintenance phase, and we look forward to hearing our little man ring the bell and say goodbye to cancer for good.

When this is all over, we are paying the kindness forward and working with The Gavin Glynn foundation. 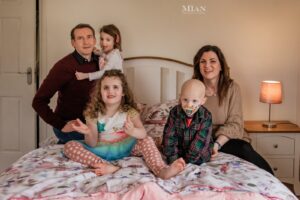 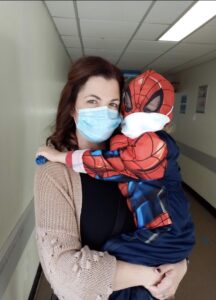